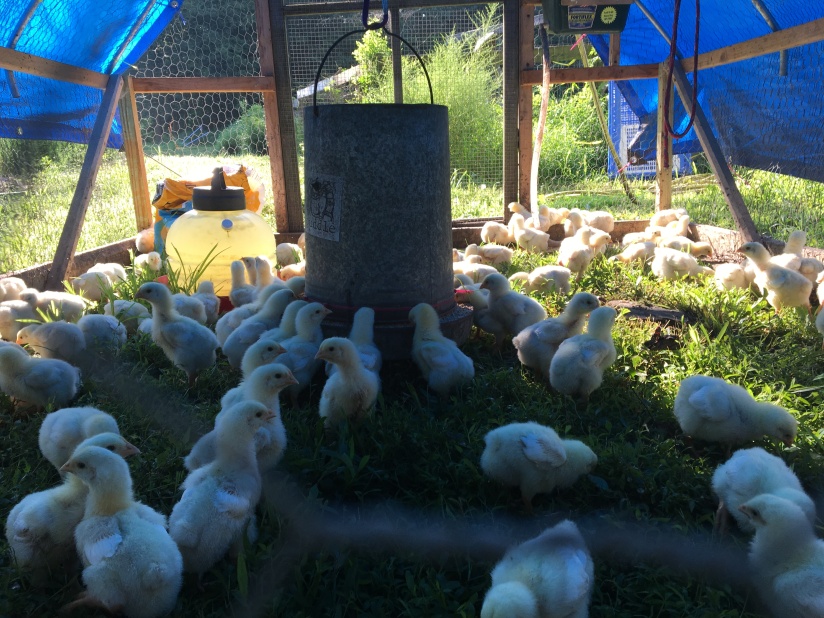 New peeps on the pasture never gets old.  These 9 day old babies already have quite a story to tell!  Usually we wouldn’t put chicks out in the tractor this early, but after two full summers into this pastured poultry endeavor we have certainly adjusted to riding the roller coaster that is the learning curve.  Prior to this picture, these guys were cozily nestled up in our brooder house and doing well.  Out of 154 birds only 1 loss in the first week!

Cute right?  (Well yes, the human AND the chick.)

Our batch of baby turkeys arrived about a week after our broiler chicks.  We have raised turkey and chicken babies together before with success, but apparently one week in age difference changes the dynamic!  As soon as we began putting the turkeys into their new home the other chicks relentlessly chased and attacked them.  NOT a good scenario for poults, as they are already prone to die quite easily in the first few weeks of life.

Time to rethink the plan.

We decided to move the older chicks into the chicken tractor and out onto the pasture.  Turkeys could then have the nursery all to themselves.  The move went very well!  Baby birds are much easier to move than full grown birds.  They transitioned into their new quarters happily; we set them up with food, water and a heat lamp and high-fived our fast thinking.  Little did we know that even faster thinking would be required later.

I had checked the weather for the evening.  Wet and drafty conditions are very bad for birds, especially young ones.  All looked clear.  Rain chances very low.  But we should have learned to never trust the weather in August.

Around 10:30 p.m. a massive thunderstorm hit.  Lightning, thunder, downpour:  the works.  And right over our farm.  Power shorts out and Drew braves the storm to reset it.  That was easy enough, but unfortunately the baby chicks were struggling mightily.  Wet and cold and half of their new living quarters in a pool of water.  I joined him outside to attempt to mitigate the damage.  We quickly set up another heat lamp and put down a layer of thick hay where the water pooled up.  We corralled the birds as best we could to move to the dry areas under the heat lamp, and watched as they all attempted to get warm and dry at once.

It seemed inevitable that we would lose some birds, and it would be our fault because we hadn’t planned well enough for the weather.

I checked on the birds throughout the night.  (Felt like I had a newborn again!)  They calmed down significantly after the storm passed and their bodies began to warm and dry.  In the morning I went out to see what birds had survived.

We didn’t lose ONE.  It felt like a Christmas miracle in August.  Little guys were dry and happy and moving around as if nothing had happened.

I never ceased to be amazed by so many things here on our little piece of Earth.  Not sure how we got so lucky to dodge the bullet this week, but I’ll take it.  I will also be ready for the next curve and always try to see it as another opportunity to learn and grow.

I spend a lot of time with eggs; thinking about eggs, washing them, counting them (obsessively!), packaging them, and oh yeah the best part- eating eggs!  Today we collected what may be a Jade Farm record: 187 eggs!  That’s about 15.5 dozen.

We hand collect and hand wash our eggs daily.  Sometimes it can be a tedious chore but often it is a prime opportunity to Zen out, something we all desperately need these days.  As a small scale farmer, we do everything ourselves.  Washing eggs is a simple task but one that keeps us connected to our animals and our customers.  I always get a little excited thinking about someone cracking open an egg and discovering a double yolker.  It is such a fun surprise and never fails to delight.

It’s hard to believe that in six short months this view will be full of lush green trees and grasses and weeds that we will fight every day to keep tame.  It’s even harder to believe that a little short of three years ago this area of our property was so overgrown with brambles, bushes, and trees that you would not be able to get through it without some sort of tool, often a machete or chainsaw in our case.  (I remember being given the precious gift of a pair of heavy duty loppers; these worked beautifully for infiltrating this area as well!)

Our farm does not look like the typical picturesque farm that one might imagine in their mind when someone says “farm.”  We purchased a property that was mostly (read: ALL) wooded, and one that had not been maintained for at least four years.  Lucky for us we find delight in all things manual labor, and have spent the last almost three years clearing our terrain purposefully (and mostly by hand!) to make room for coops, trails, pasture, and places for animals to roam and forage.  We adopted two goats to help us do the job too.  Every year we get a little bit closer to discovering and uncovering pieces of this land.  What an honor it is to mold and be present in the place where we live.

I imagine this view will change even more in the years to come.  (Sometimes the view changes daily, like when you notice that a goat has managed to crawl through the small coop door that is meant only for chickens.)  It certainly never fails to make me smile and sigh when I look on it in the morning light or the evening sun.  I reckon it never will.